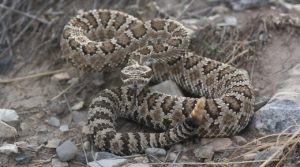 Rattlesnakes are common in Montana in the lower elevations.

Here in Montana, there is only type of rattlesnake – the Western Rattlesnake. The western rattlesnake also has a sub-species in Montana called the prairie rattlesnake, which is probably the most frequently seen rattler in the state.

Happily, as far as rattlesnakes go, the western rattlesnake and its prairie cousin is rather “tame”. Unlike the Western or Eastern Diamondbacks, Western Rattlesnakes are not aggressive. Unless you practically step on them or attempt to pick them up or corner them, these rattlesnakes will show scant aggression. And given the opportunity, the rattlesnakes will also usually attempt to beat a hasty retreat when confronted with humans too.

Despite the relative docile nature of western rattlesnakes, you still have to take precautions when hiking or camping in rattler country. So, listed below are some tips people can follow to reduce their likelihood of “unpleasant encounters.”

By having a better understanding of rattlesnakes, a person can GREATLY reduce the likelihood of having an up close and personal encounter with a rattler. So let’s go over some of the places where a person is highly likely, and not likely, to find a rattlesnake.

Note, rattlesnake habitat in the eastern/southern part of the United States is VERY different than what is found out West. The section below only covers snake habitat out West!

Rattlesnakes and rocks and rattlesnakes and water go hand in hand. If you can remember this, you’ll go a very long ways towards avoiding encounters with rattlers in Montana and most other areas out west.

Rattlesnakes like rocks because they absorb the heat during the day, allowing them to soak in the heat during the night time hours. And, because the rocks tend to warm up more slowly then the ground does during the day time hours, snakes can also be found on the rocks staying cool. Additionally, much of the snakes prey (such as rodents) make their home in rocky areas too. And finally, rocks provide perfect hiding places for rattlesnakes, both to ambush unwary prey as well as to avoid becoming a meal for a hawk, eagle or other wildlife that is known to go after rattlesnakes.

For the same reason snakes are frequently found along the edges of water, especially rivers. The river brings significant prey to its banks, making for a perfect place to find supper for a rattlesnake. And the rocks provide superb hiding places.

For hikers and campers, what this means is that always try to avoid camping or wandering aimlessly around in rocky areas that seem like they would be a perfect home to a snake (such as where numerous rock crevices/caves exist). Additionally, for people engaging in water activities, be careful about when getting out of the river where the shoreline of the river is heavily rocked over. If possible, always get out of the river at a sandy spot – a snake in the sand sticks out like a sore thumb but will disappear entirely into a rocky area.

Lastly, when in prairie rattlesnake country (on the plains of Montana), always be on the lookout for them when around old, abandoned farms and around big hay piles or other “feed” areas. The feed for cattle attract rodents, which in turn attracts the snakes!

Rattlesnakes and the Weather

So..what this means is that when it is 90 degrees and sunny in the mid-afternoon, the odds of you seeing a snake while out in the sun are very, very remote (remember, it may be 90 degrees in the shade, but it will be over 130 degrees at “snake level” in the sun!). Instead, during the mid-afternoon in the summer, you’ll find snakes tucked away out of the sun, either in shady areas of a forest or, preferably, tucked away in crevices/caves of rocks. Thus, to avoid rattlesnakes during the summer afternoon, stay away from rocky areas that have numerous small crevices/caves for the snakes to hide in.

During the spring and fall, when the temperature is cooler, rattlesnakes are probably most likely seen by people. The reason for this is because the snakes come out into the sun during the midday to warm up, following the chilly nights of spring and fall. Thus, when hiking through sunny areas – especially where there is rocks – you need to be extra careful where you step.

Due to the strong sun and hot days, rattlesnakes hide in the shade and cool places during the summer. They then come out towards dusk and will be most active during the night, crawling back into their shady places soon after sunrise. What this means for the hiker or camper is that before sundown and lasting til just after sunrise, a person needs to be careful about where you step – not always easy at night! Because of this, it is never a real good idea to head out on a hike during the night-time hours through rattlesnake country. While the odds are low that you’ll step on one, the possibilitiy DOES exist – and one you need to be aware of.

The good news here is that rattlesnakes are not exactly big travelers. Thus, if your camp site is away from preferred snake habitat (rocks and water in particular), the odds are very low that a rattlesnake is likely to come slithering into your camp and set up shop during the night.

Additionally, because pavement absorbs heat, rattlesnakes are commonly found on and along roadways during the summer months during the night. Thus, take a flashlight when hiking along a paved road during summer nights, and try to walk ON the roadway, not along the side the road on the gravel median. A snake on a roadway is very easy to spot – but will be very difficult to see in the gravel.

During the winter in Montana and most other places out west, snakes disappear entirely, going into their holes with hundreds and sometimes thousands of other snakes to sleep the winter away. Except for places like southern Arizona and California, a person need not worry about rattlesnakes in most Western areas of the US during the winter months.