There’s few things handier when camping than a bucket or pail. After all, you can find innumerable uses for buckets when camping, from hauling water, washing dishes and cleaning up. 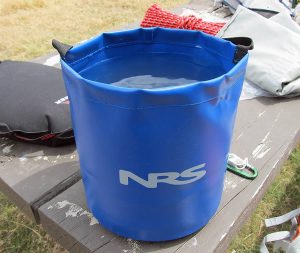 The NRS Bail Pail is the best collapsible bucket around. Period. More info at NRS.

The problem, of course, is who wants to drag a normal plastic or metal pail to a campsite? A normal plastic bucket, while far from heavy, is a pain to pack away in a trunk with all the other camping gear. Plastic buckets also have a nasty tendency to blow away in a stiff breeze. And your good ol’ household bucket isn’t the most durable creation either, and likely will fall apart under the rigors of campground use.

Recognizing the need for “buckets in the wilderness” and the weaknesses of bringing out a normal Wal-Mart household bucket, outdoor gear manufacturers have come out with a number of neat inventions.

Regardless of their name, these buckets/pails/sinks all serve the same purpose—to store and haul water while being imminently packable and portable.

Just One Slight Problem – Not All Collapsible Buckets Work

Yet, on the way to “bucket paradise,” not all these buckets/pails are created equal. In fact, I’ve cycled through four—yes, four—of them before I finally, at long freaking last, found a collapsible bucket/collapsible pail that actually works as intended.

Since I’ve cycled through four of these modern creations, it sort of makes me a pseudo-expert on these handy camping accessories, so I thought I’d write up an article about it.

With some luck, you’ll avoid cycling through all the various buckets like I did and can just get the right bucket “right out of the gate.” Oh, and more good news—the “right collapsible bucket” is actually the least expensive one, too.

Perhaps not surprisingly, collapsible buckets/portable pails often are designed differently. So let’s look at the three most common designs.

The “Pack It In” Style

This style, popularized by the Sea to Summit collapsible buckets, look nice, for sure. These buckets, which “pack down” into a tiny little package, at first seem eminently portable. They weigh a few ounces and take up virtually no space whatsoever when fully packed down.

Sea to Summit Kitchen Sink. This collapsible bucket is a pain to get back into its storage bag. More info at REI.

Moreover, it’s kind of common sense that if you do enough of this “jamming” that eventually you’ll damage the bucket itself—most likely either the rim of the bucket or the cloth that holds the water. 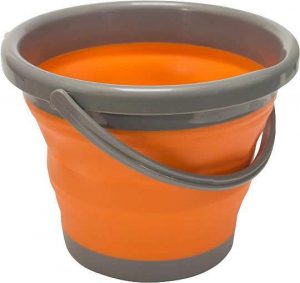 A Collapsible Bucket. Folds down nice but is a bit tippy when filled with water.

I dub these collapsible pails/collapsible buckets the “collapse style”—since that’s what they do—collapse. These buckets, which are a bit triangular in shape, open up and then slides back together.

The Ultimate Survival Technologies FlexWare Bucket exemplifies this bucket design, which is also available through REI. This collapsible bucket, which is made from silicone, is easy to open and close.

This bucket I liked much better than the “Jam It In” style. However, I found the bucket rather tippy due to its design. Since the base of the bucket is a bit narrower than the top, when filled with water the bucket is somewhat tippy. For using at a campground with a nice, flat picnic table, the tippy nature of this design isn’t a big problem. But for backcountry camping—such as I do when I float camp—finding perfectly level ground to place the bucket often isn’t easy.

So, I made yet another return to REI (thank god for the great return policy REI has).

Finally, I hopped online, went to NRS.Com and ordered the NRS Bail Pail. This pail doesn’t need to be jammed into a tiny storage container. Nor is it tippy. Instead, it’s simply a flexible pail that “rolls up” when empty, making it pathetically easy to store. Empty any water in the bucket, roll it up, put it in its storage bag, and you’re done. 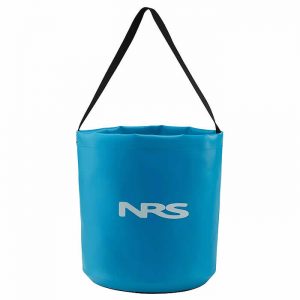 The NRS Bail Pail is the best collapsible bucket for camping. Period. More info at NRS.

An additional bonus is that, since NRS makes the bucket, the bucket is exceptionally durable. It’s made from very tough and surprisingly thick PVC. The PVC prevents the bucket from rotting away, resists tears from normal use and won’t become green with mildew if stored wet for a few weeks or even months.

Overall, this bucket it ten times better for general car camping or float camping than any other collapsible bucket on the market.

And as a bonus, it costs less than some of the fancier ones, too.

So if you’re in the market for a collapsible/portable bucket for camping or canoe camping, then don’t waste your time with other products on the market. Head over to NRS and buy the NRS Bail Pail.

You’ll be happy you did.