A Guide to the Types of Camping Stoves

Many elaborate outdoor dinners have been completely ruined by people who have “visions.” These “visions” are when people see themselves cooking a full-blown, good tasting dinner over an open-fire, while having a great time. 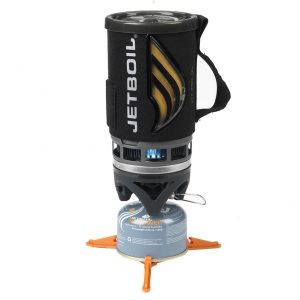 JetBoil Canister Stove is ultra-light and ultra-portable. Ideal for boiling water. Perfect for backpacking and kayak camping and other activities where weight and bulk is of top importance. More info at Campsaver.

Too often, though, these visions meet the hot wall of reality. I mean, who wants to stand over a hot, smoky campfire for hours at a time, only to eat smoky tasting food that is half done in some spots and horribly burned in others? And gee, isn’t it fun to run around and gather all that firewood, especially in a campground that has already been “picked over” by previous campers?

Happily, camp stoves have been invented to rescue the campground chef from smelly clothes, burnt food and many four-letter-words. Moreover, a camp stove may even rescue an entire camping trip, since campfire bans happen in popular outdoor areas due to “overbrowsing” by people gathering wood. And here in Montana, like many other places out West, campfires are frequently banned during fire season.

For this reason, going camping without a camp stove is a rather “zombie-like” thing to do.

Fortunately, there is a wide variety of camping stoves available today, most of which are at least halfway decent. So, to help the unwary camper in Montana who is faced with the decision of what to get, I’ve put together this little guide. Hopefully, after reading this, you might walk away with an idea of what kind of camping stove to get to meet your needs and where to get it.

The Different Types of Camping Stoves

While these two types of stoves exist, there are several other options today. And the purpose of this section is to introduce readers to these different types of stoves. 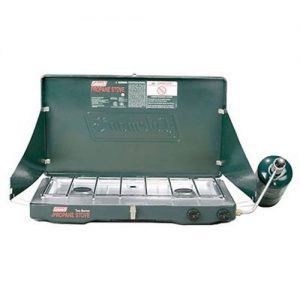 An oldie but a goodie, the standard propane stove is exemplified by the Coleman propane stove. This stove—and the multitude of stoves that have copied the design—are widely used and sold today. And for good reason. These stoves are durable, reliable and perfect for people who need a stove for campground use—particularly if you need to feed many people.

These stoves are ideal for campground use for many reasons, including:

Standard campground stoves aren’t meant for backpacking, as they are far too heavy and bulky—especially the older rock-solid, bulletproof stoves Coleman used to make. Nor are these ideal for float trips unless the group has a very large boat.

That said, there are some “semi-portable” versions available. Basically, these semi-portable versions use the same 1 lb canister of propane fuel as the standard campground stove does. However, the stove itself is much lighter, flatter and skinnier. These portable stoves lack the “bells and whistles” found on other campground propane stoves.

As such, these types of propane stoves are quite portable. While still too big and bulky for backpacking, they work well activities such as canoe camping or group floats in larger inflatable rafts.

These types of campground stoves are available pretty much anywhere online and off. Amazon is, by far, the best place to shop for these stoves online.

These types of backpacking stoves have become increasingly popular. And indeed, I finally traded in my old backpacking stove for one of these new canister designs. Canister stoves have the benefit of being ultra-light and ultra-portable. Moreover, they are insanely simple to use.

The big benefit of canister stoves is that there is no “liquid” fuel to slosh around, leak or otherwise make a nuisance of itself. The canisters for these stoves, which are readily available online and at virtually any sporting good store, are inexpensive. Moreover, the fuel inside them—which is pressurized—literally lasts forever. There is no worry about the fuel “going bad.” Nor is there any worry about how to store the fuel. Any ol’ garage works just fine for storing these canisters.

The JetBoil system exemplifies this type of backpacking stove. JetBoil stoves are the most compact stove you’ll find and work great for backpackers and float campers. I bought the JetBoil Flash and have had zero complaints about it.

For backpacking, ultra-light float camping, kayak camping and other activities that require ultra-light and ultra-portable stoves, canister stoves are the camping stove of choice.

And I personally highly recommend the JetBoil, especially if all you need to do is to “boil water.” If you need to actually “cook,” then you’ll want to take a look at some of the other JetBoil attachments.

View JetBoil Canister Stoves Campsaver – Where I bought my JetBoil stove and who usually has the best prices.

Jet Boil Stoves at Amazon – Usually has most JetBoil stoves, but not necessarily the best prices for some reason.

Other online stores at sell JetBoil and other canister stoves include REI and MooseJaw.

The original backpacking stove and still in use today, although their popularity is fading. For standard backpacking, other stove types have overtaken this type of stove since liquid fuel stoves are heavier and bulkier (if only by a little bit). However, for cold climate camping, liquid fuel stoves still are the best stoves to use. 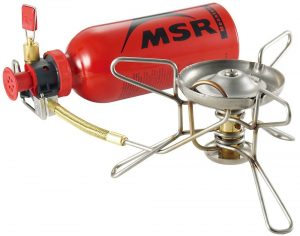 The big drawback with these types of backpacking stoves is the “fuel issue.” So what’s the fuel issue? Well, first—I’ve had a few of the canisters which old the fuel leak. Either the seal was bad or the seal simply worked a bit loose, thus allowing fuel to dribble out.

Second is the storage problem. You can’t leave liquid fuel in these canisters for months or years at a time. Thus, when you get back from your trip, you need to figure out what to do with the left over fuel. Tossing it into your garage isn’t going to work.

And finally, the fuel these stoves use—typically white gas—lasts a long time in storage. But it won’t last forever. Oxygen in the fuel container will, over time, start to break down the gas, which makes it less effective to burn and eventually may not burn at all.

Campsaver – Usually has the best prices and all available “accessories” for the MSR liquid fuel stoves.

Amazon – Usually has most MSR stoves, but some accessories are lacking.

Other online retailers to find liquid fuel stoves include REI and Moosejaw. 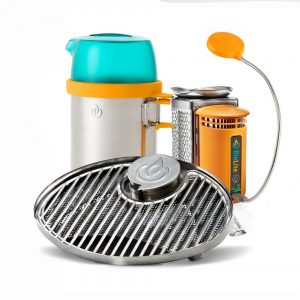 These stoves might have a “technical name” I’m not familiar with, but regardless of what you name them these stoves are pretty cool.

And did I mention that they also produce electricity?

These BioLite stoves are pretty nifty for campground use. However, they are bulkier and somewhat heavier than a typical canister stove. As such, BioLite stoves aren’t really for backpacking, although some do use them while on the trail. For me, though, I rather not have the worry of running around trying to locate twigs and leaves after a long day on the trail.

But that’s just me. 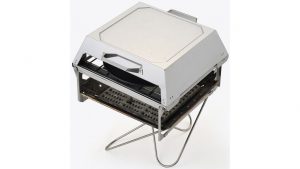 The Field Oven works great for baking at a campground. More info at Campsaver.

For those needing to prepare large quantities of food that turns out similar to home, these ovens/pizza stones might be of interest.

These stoves runs off either wood or charcoal and are not placed on top of a campfire. In essence, they function as kind of unique grill. For those desiring fresh baked pizza, rolls or other oven goods, these are the stoves of choice for campground use.

Needless to say, and common sense stuff here, these stoves aren’t meant for backpacking. They are too heavy, bulky and—after use—too dirty for simple transport by back or by smaller boat, such as an inflatable kayak or smaller inflatable raft.

But for campground use, or for perhaps where you’re having a horse carry all your gear into the backcountry, these stoves are perfect for many uses.

See more of these types of stoves at Campsaver 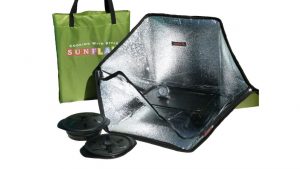 A solar oven. Good for slow baking and simmering. More info at Amazon

Also known as solar ovens, these are, as the name suggests, meant for cooking food using the power of the sun.

Solar stoves are meant for baking and simmering food over longer periods, since these stoves don’t have an open flame or get much above 300 degrees Fahrenheit in even the best of conditions.

One obvious drawback—you need sun to make the oven work. And even if you live in a sunny spot, remember that many campgrounds are located in forested locations (shady campground are always nice). The tall trees often play havoc with solar panels and solar stoves, since they’ll frequently partially block the collector. This partial blocking greatly reduces the stoves effectiveness.

What Stove to Get for What Activity

Cold weather backpacking, mountain climbing, winter camping. Ability to “refuel” the liquid fuel canisters makes them handy for international travel, too—provided the stove you get runs on standard automotive unleaded fuel. If you plan to travel internationally, don’t get a liquid fuel stove that uses a hard to find specialty fuel, such as white gas.

The name says it all. If you’re camping in a campground and space in your car isn’t a top issue, a standard campground stove is perfect. And if you’re worried about space, just get a semi-portable version.

If you know you’ll be using this in a real sunny spot, this stove works fine for camping. Also serves as a unique ‘backup’ stove for emergency home use—at least if you live in a sunny location.

Another nice campground stove or “emergency backup” stove. No need for man-made fuel, so there’s never a worry about running out of fuel—after all, leaves and twigs are everywhere. But not a stove for day to day use, especially if you’re traveling light.

Another specialty campground stove. Meant for home use or campground use only.