Camping & Hiking with a Dog in Grizzly Country

Camping with Man’s best friend is always “interesting”, not to mention popular. The unpredictable nature of dogs leads to many funny things when camping, such as having your dog chase a deer and many more memorable adventures. 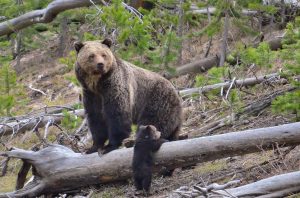 Yet, in certain areas of Montana, there is a “dark side” to camping and hiking with your dog. And the “dark side” has the name of “Grizzly Bear.”

In some places of Montana, particularly in/around Glacier National Park, dogs on the trails (and sometimes even in campgrounds) are not allowed. Too many people, this is a big disappointment since they have dragged their four-legged, furry companion on a 1000+-mile voyage, only to have to lock the dog in the car while the owners are out hiking a trail.

Yet, as “cruel” as this may seem, there is a very valid reason for this. And the name of the reason is “grizzly bear.”

Many people enjoy taking their dogs on hiking trips in Montana and elsewhere for the simple reason that, besides providing companionship, the dog can ward away intruders, both of the four legged and two legged kind. And most areas of the United States, this is quite true. A dog will prevent coyotes from entering your camp, keep away the local deer population, chase away the raccoons, and make any uninvited two legged intruders mind their manners.

Unfortunately, people also assume that a dog will provide the same level of protection against grizzly bears. And this is, sadly, a fallacy that has only proven untrue due to fatalities among both dogs and humans at the hands of attacking grizzly bears.

You see, grizzly bears are the one animal in the United States that will not be swayed, cowed or bullied by an aggressive, barking, or defensive dog—regardless of the dog’s size or breed. An aggressive acting dog can ward away just about any other animal, except for a grizzly bear.

Moreover, the sheer act of a dog getting aggressive and barking has a more unfortunate side effect. Studies have shown that such behavior by dogs (which is a instinctual thing for a dog to do when faced with a large animal like a bear), actually makes grizzly bears more aggressive. Generally, when bears run into people, absolutely nothing happens. The bears either leave the vicinity or simply ignore the people (unless the people do something stupid, like walk up to it for a better photo).

When a dog is present, however, this calculus changes considerably. A dogs barking and aggressive behavior represents a challenge to a grizzly bear—a challenge the bear will not back down from. In essence, the simple, natural behavior of a dog to “protect” its owners by acting aggressive has a very high likelihood of actually making the bear more aggressive too. And an aggressive grizzly bear is not a good thing to have on your hands, on the trail or in camp.

And lastly, it also needs to be remembered that dogs are inquisitive animals. When hiking with dogs, it is quite common for the dogs to head off the trial or wander further up it. Well, guess what. What if your furry friend finds a grizzly bear – or worse yet – a grizzly bear cub – while out on its voyages? The dog will become naturally aggressive/playful as it always does against wildlife, perhaps even attempting to chase the bear.

What happens should provide no further explanation. Either the bear takes the dog up on its challenge and mauls it in a very uneven fight, or the dog realizes it can’t engage the bear in a chase and then finds itself being chased by the bear instead.

And guess where a dog that is being chased by a bear is going to head? You guessed it, the dog is going to run straight back towards the owner, with a upset and aggressive grizzly bear right behind. This is a recipe for total disaster on the trail – and explains why places like Glacier National Park that have high bear populations have regulations in place preventing dogs on the trail.

So, in short, feel free to bring your dog to Montana for both camping and hiking. But be prepared to leave your dog either back in camp, with friends or locked in your vehicle when you venture out on trails that cut through prime grizzly bear habitat – particularly in Glacier National Park.