The Thompson River is very narrow in its upper reaches, resembling more of a creek than a river. As it moves downstream, it picks up width and volume from a number of tributary streams, making it friendlier for float fishing.

Despite the logging operations, the river is surprisingly clear. Even during spring run-off, the Thompson River remains relatively clear, allowing for fishing when many other Montana rivers are blown out by high, muddy water.

The region is heavily wooded – and logged. Logging roads on each bank closely follow the river from the rivers beginning to its end, allowing for easy access. The riverbanks are an appealing mix of grass, brush and forest.

The Thompson River is quite isolated, and does not flow through any towns during its journey to the Clark Fork. Despite the isolation, the Thompson River receives low to moderate fishing pressure, especially in areas that are very close to the road or by the campgrounds.

Once upon a time, the Thompson River had ample promise but never quite lived up to its potential as a blue-water trout fishing river. A lack of fishing limits and sedimentation from logging prevented the Thompson from holding significant numbers of large fish.

However, changes the past fifteen years have greatly benefited the river. Reduced logging pressure and better logging practices have greatly reduced sedimentation runoff. Fishing limits instituted by the Montana FWP have given trout a chance to get large before being caught and tossed into the frying pan. 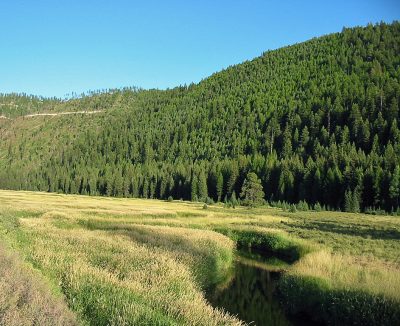 And the results have been solid. Today, the Thompson River is home to many larger rainbow trout and provides solid trout fishing in a remote and secluded environment. And despite the increased numbers of larger trout, the river still has low fishing pressure due to its remote setting and rather long journey though an uninhabited part of Montana. Today, few out-state anglers ever visit this river. Instead, locals primarily fish the river.

It should not be surprising that the Thompson River has rebounded in recent years. The river itself possesses all the classic ingredients of a great trout stream. The river has clear water, numerous boulder gardens, countless riffles, many deep pools and excellent habitat along the banks in the form of downed trees and bushy banks. And its remote setting—with not a single town along its path—has kept fishing pressure generally low.

The Thompson River is home primarily to rainbow trout, cutthroat trout, whitefish and brook trout, with an occasional bull trout found further down river near the Lower Clark Fork. As the river flows are slow to moderate, and the river has both excellent access and is of only narrow to average width, the Thompson is a superb wade fishing river.

The Thompson River is an excellent river for the dry fly fishing. The Parachute Adams, along with the Elk Hair Caddis, are perhaps the fly of choice for this river, as the trout rise readily to almost any bushy dry fly. Later in the summer, hoppers work extremely well. For those times when the fish aren’t rising, wolly buggers, small streamers and Prince Nymphs’ also work extremely well.

Despite the rivers easy access from roads, fishing pressure is moderate at best on most sections of the river.  While some very easy to access spots receive solid fishing pressure, those willing to venture a bit away from easily accessible and popular access spots will find areas of the river rarely fished. And since the river runs for nearly forty miles through an area that is basically uninhabited, finding a secluded area is relatively easy to find.

Inflatable Canoes
Inflatable canoes are ideal for floating and fishing many waters in Montana and elsewhere and are very portable.

The upper portion of the Thompson River is a river best traversed by canoe, an inflatable canoe or an inflatable kayak. The current is fairly slow, and is broken up by many dead pockets of water. The river is also extremely narrow—again making larger boats or rafts problematic. 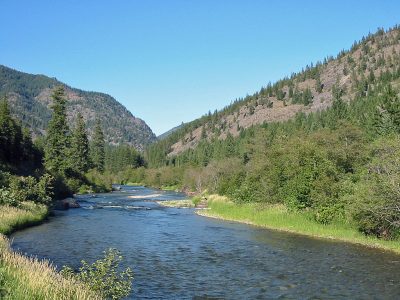 The Lower half of the Thompson River is wider, but still somewhat shallow come the low water flows of summer.

No whitewater is found on the upper half of the river. A canoe or kayak also comes in handy for paddling across the three Thompson Lakes (Upper, Middle, Lower). Also expect to find logjams and downed timber along and sometimes across the river.

Below the outlet at Lower Thompson Lake, the river meanders slowly. It flows primarily though private land on its upper section. Normally, this would create access problems. However, various timber companies own this land and allow for recreational use, including camping and fishing.

Below this stretch of private property, the rivers enters the Lolo National Forest. After entering the National Forest, access becomes even easier and numerous official and unofficial camping areas exist. The Thompson River Backcountry Drive also begins to closely follow the river, too.

The river starts to gain speed below the bridge located at Bear Creek. From this section to the rivers end, most inflatable boats, canoes or hardshell kayaks work well. Several smaller rapids and riffles, along with some waves, exist. During very high water, some Class II and Class III rapids are located several miles above the confluence with the Clark Fork, just below the Copper King campground.

One word of caution. The Thompson River becomes very shallow during low water years or late in the summer. Anyone who wants to float the entire river’s length is best advised to do so early in the summer instead of waiting until August.