The Flathead River is a large river. Draining a sizeable portion of Northwest Montana, including parts of Glacier National Park and the Bob Marshall Wilderness Complex, the waters of the Flathead River flow swiftly through some of the most beautiful scenery Montana offers.

The Flathead River is divided into two distinct rivers separated by Flathead Lake, the largest freshwater lake in the Western United States.

Below Flathead Lake, the river is regulated by Kerr Dam, which also regulates the level of Flathead Lake. Below the Dam, the flows of the Flathead River vary wildly, and can greatly impact both fishing and floating. Numerous rapids exist that can make floating a challenge (see floating information for more detail).

The Flathead River ends at the confluence with the Clark Fork in the vicinity of Plains, MT.

The health of the Flathead River is largely determined by two dams (Hungry Horse Dam and Kerr Dam) that regulate river flows and temperatures, and not always to the benefit of the fisherman. And then there’s the ecosystem of Flathead Lake, which has changes significantly from what it once was. To top it off, the Flathead River itself is fed primarily by snowmelt, resulting in clear, cold water that has fewer nutrients than many other Montana rivers.

That said, all of this bad news has had one big upside: very low fishing pressure compared to many other Montana Rivers. Fly fishing the Flathead River does not require exact fly imitations nor does it require perfect technique. The fish in the Flathead River aren’t especially picky about what is thrown at them. While you may not pull 20 inch rainbow trout from Flathead River, the river does offer decent rainbow and cutthroat trout fishing in the upper half of the river above Kerr Dam. Below Kerr Dam, the northern pike fishing is excellent, with some largemouth bass, brown trout and some rainbows thrown in to the mix as well. 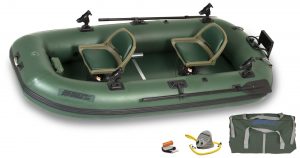 Upper Half of the Flathead River Above Flathead Lake

Above Flathead Lake, the Flathead River flows quickly and is quite wide by Montana standards. The river also has numerous braids and channels in between Columbia Falls and Kalispell.

Due to the speed, depth and width of the river, wade fishing can be difficult except for later during the summer, and can be downright dangerous at high river flows. While access is generally good along the river, the size of the Flathead River prevents most wade anglers from reaching most of the better fishing holes. 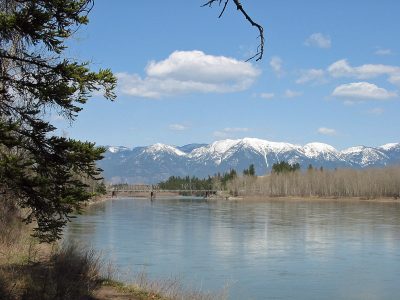 The Flathead River in Montana. The now removed Old Steel Bridge still spans the river in the distance.

The Flathead River holds a decent population of medium sized rainbow and cutthroat trout. The trick to finding them is to cut the river down to size, fishing obvious holes and pools behind rocks, fishing around the numerous forks in the river, and along bank cover, such as downed trees. A caddis fly (size 12-14) floated over prime territory is always a good bet. A hopper during late summer also works well, especially around Kalispell where fields come right up to the river bank.

During the day, trout can also be found down in the river depths. To get at them, use a prince nymph with a sink-tip line and weights, bouncing it along the bottom.

Bull trout can also be found in the river during the summer as they migrate up from Flathead Lake to their spawning grounds well upstream (remember, no taking of Bull Trout).

South of Kalispell, the Flathead River slows considerably and branches off into numerous sloughs. This is northern pike country. The best time to fish for these beasts is during the spring and fall when they cruise the shallows. A large streamer for the fly fisherman or a spoon such as a daredevil for the spin fisherman work well.

Finally, mountain whitefish are common all along the Flathead River. The Old Steel Bridge FAS in Kalispell, MT offers an excellent place to catch whitefish for anglers who do not have a boat.

Below Kerr Dam, the flows of the Flathead River are completely regulated—for power production and not for fishing. The result of this is spotty trout fishing. While some large rainbow and brown trout do exist, the river below Kerr Dam is considered trophy northern pike waters.

The best rainbow trout fishing is found in the first few miles right below the dam. Farther down the Flathead River, larger brown trout can also be found.

But it’s the pike that draws anglers. The area around Dixon offers the best pike fishing. Catching these monsters on a fly rod requires strong gear—no wimpy rods or tiny flies. Large streamers, strong tippets, heavy weight rods are the rule. Throw the streamers into the weeds and retrieve it quickly in an erratic motion, mimicking an injured fish swimming.

The best fly fishing on the lower Flathead River is all located on the Flathead Indian Reservation. Before heading out to fish, you will need to obtain a tribal fishing permit. Tribal permits are easily obtainable at all local fly fishing shops.

The upper part of the Flathead River above Flathead Lake offers a relatively easy float. The current is generally fast. Below Blakenship Bridge, depending on river flows, several small rapids that have large waves exist that can pose problems for canoes. These small rapids can be bypassed, but the fast current can make it difficult to avoid them. Beyond these rapids, other than a few small riffles and some whirlpools that form where the various forks in the river converge, nothing should give a floater of any skill level problems on the Flathead River. 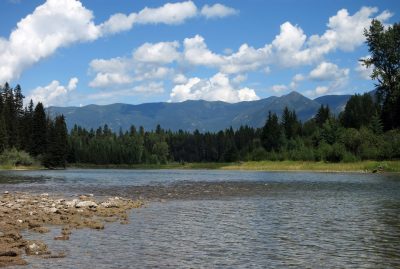 One of the nicest floats on this section of the Flathead River is between Columbia Falls at Tea Kettle FAS and Old Steel Bridge FAS in Kalispell. The scenery is wonderful, the current is steady and float traffic—except on nice summer weekends—is fairly low. Float times for this section are about 4 hours or so, depending on how frequent your stop. Also, all the islands in this stretch make for great spots to pull over for lunch.

Below Kerr Dam, the Flathead River flows through a canyon. The first seven miles below the canyon are called “Buffalo Rapids.” Depending on current stream flows, several class IV rapids with sizeable waves and holes exist. Be smart! Before entering these rapids, be sure to scout them out first. Due to the variable flows from the dam, what one-day may be a rapid may the next be a big hole and the next completely washed over. The Flathead River is big below Kerr Dam, and more resembles a slow moving lake as it approaches the Clark Fork.

Listed below are selected river miles for the Flathead River in Montana. You can get more detailed information about some of these fishing access spots at the Montana FWP Website.