The North Fork Flathead River begins in British Columbia, and travels for 47 miles before spilling over into Montana. Throughout it’s length in Montana, it forms the western boundary of Glacier National Park.

Upstream of Big Creek, the North Fork Flathead River has a “scenic” designation, meaning no motors are allowed. Down stream from Big Creek, the river has a “recreation” designation, with a maximum speed of 10hp. However, with all the rapids, twists and turns and gravel bars, any floater or fisherman is highly unlikely to see any boat with a motor on it.

The North Fork Flathead River is truly one of Montana’s wild streams. Other than the small town of Polebridge, which has no electricity, the North Fork does not pass through a town of any size for it’s entire length. The river itself is moderately wide and flows quickly. The water, which primarily comes from snowmelt, is cold and very clear. It is also low in nutrient content, and as a result, a fly fisherman will not find monster rainbows or cutthroats lurking in the river.

The scenery along the North Fork Flathead River is absolutely awesome. Magnificant views of Glacier Park are found on many sections of the river and along the road that roughly parallels the river from Columbia Falls to the Canadian border. Even though the river flows through very mountainous country, the North Fork itself is relatively tame, offering only a couple of smaller rapids of Class II or Class III, depending on river flows.

The North Fork Flathead River also has numerous deep, clear pools, tucked away among its many twists and turns. These holes make wonderful fishing holes for the intrepid angler who can reach them. These pools often exceed fifteen feet deep, although the bottom is often seen due to the exceptional clarity of the water.

As one might guess, flowing through such wild country, the local fauna is also quite diverse. Grizzly bears and moose are not uncommon along the river.

Due to the cold, clear, low nutrient water, fly fishing in the North Fork Flathead River can be spotty. During the summer months, numerous smaller cutthroats in the 8-12 inch range cruise the river. They are easy to catch on various caddisfly and mayfly imitations, floated around submerged and partially submerged structure, such as rocks and downed trees.

Wet flies also work well, especially in the numerous deep pools. To get the proper depth, a sink tip line or weights are often needed, since these pools can be quite deep. 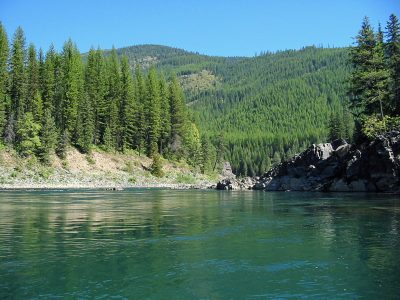 Deep Pools along the North Fork Flathead River in Montana provide the best fishing location. But you’ll generally need a boat to reach them.

For the spin fisherman, small spoons (hopefully with the barbs removed), fished around the rocks and pools will pull in these cutthroats as well.

While fishing for cutthroats, especially if an angler is using a larger wet fly or streamer, the possibility of hooking a large bull trout exists. These fish, which travel up from Flathead Lake on a somewhat unpredictable basis to spawn in the north fork tributaries, aren’t picky eaters. Just remember, it is illegal to intentionally fish for or keep a bull trout.

Wade fishing is generally good along the river. Access for the wade fisherman is generally easy, as the North Fork Road closely parallels the river for much of its length, although some bushwhacking is required to reach the better spots and deeper holes.

However, while access is good, fly fishing from along shore can be very difficult due to steep hillsides, rocky terrain and dense vegetation. An inflatable raft, inflatable kayak, pontoon boat or other boat is particularly helpful to reach the “hidden pools” between Big Creek and Glacier Rim River Access. While the road is nearby, the river frequently flows down in a steep canyon, making road access difficult.

Overall, the North Fork Flathead River may not appeal to the angler in search of large, trophy sized trout. That said, between the eager cutthroat fly fishing, the beautiful scenery and the wonderful float trips that can be taken on the North Fork, this river ranks as one of Montana’s finest rivers and is worthy of a visit by someone on a Montana fly fishing trip.

The North Fork, considering the rugged and mountainous terrain it flows through, is a relatively tame river for floating. The entire river in Montana is essentially floatable, although the area above Ford access site can have some slow floating and some dragging of the raft during low water. Canoes, inflatable rafts and inflatable kayaks all work well for a float down the North Fork of the Flathead River.

Below Ford river access, the river can be floated pretty much all year. There are no major rapids from Ford until reaching the Glacier Northern Flats area, where several small Class II and one Class III rapid exist. Beyond these rapids, it is smooth, quick flowing water until the confluence with the Flathead River at Blakenship Bridge.

That said, there are a couple of things to watch out for when floating the North Fork Flathead River. During high water is not the time to float this river. As there are no dams on the North Fork Flathead River to regulate its flow, it runs fast during high water, with huge trees floating down like little twigs. With the passing of the Moose Fire, which burnt both sides of the river in the vicinity of Big Creek in the summer of 2001 and then the Robert Fire and Wedge Canyon Fire elsewhere on the river in 2003, floating trees and downfall are even more of a hazard than it has in the past. 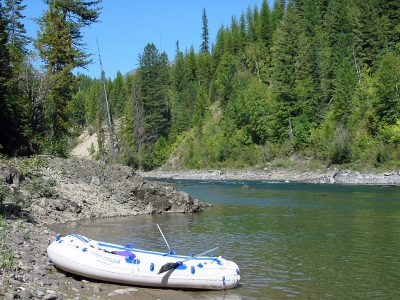 Additionally, logjams on the river form each year, in various places. Currently, several log jams on the North Fork are found between Polebridge downstream to the Camas Road Bridge. Always be on the lookout for a logjam partially blocking the river. Since the river makes a lot of twists and turns, and in a few places becomes quite narrow, surprise logjams can pose a real hazard.

The rapids in the North Fork Flathead River are far from severe, certainly nothing like on the Middle Fork Flathead River. That said, the North Fork twists and turns extensively, and small rapids are found behind most curves. These rapids have scattered large waves with lots of conflicting and swirling currents. While an inflatable raft or inflatable kayak should have absolutely no problems, inexperienced canoeists may run into problems. An inexperienced canoeist may have difficulty at times keeping the boat pointed down river in some of these rapids and waves.

Other than those words of caution, the North Fork Flathead River is a wonderful river to float. Access is easy, with numerous designated access sites, and countless unofficial access sites. One excellent float is between Big Creek and Glacier Rim, a float of about 13 miles. Another longer float is between Polebridge and Big Creek – just be prepared for a long, bumpy ride up to Polebridge, as the road is not paved for much of its length and not very well maintained.