The Middle Fork of the Flathead River begins just outside the Great Bear Wilderness, which is located south of Glacier National Park. It soon enters the wilderness area and begins a beautiful, frequently wild ride through the heart of the wilderness area.

Flowing past huge mountains and through deep canyons, the Middle Fork, along with the South Fork, is Montana’s premier wilderness river. The remote setting of the Middle Fork keeps the wilderness portion relatively free of both fishermen and floaters. Except for during spring run-off, which can last well into July in some years, the waters of the Middle Fork Flathead River are exceptionally clear.

The Middle Fork emerges from the wilderness area near Essex, where it flows past a unique place called the “Goat Lick.” Here, salt is found on the grounds surface high along the banks of the river. Numerous mountain goats are often seen here, as they travel down from their high peaks for the salt. Grizzly Bears and other wildlife are also frequently found here as well. 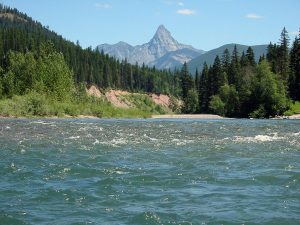 Middle Fork Flathead River has many scenic views of the taller peaks in Glacier National Park.

Beginning in Essex, the Middle Fork Flathead River parallels Highway 2 to West Glacier, although the river is generally out of sight as it often lies hundreds of vertical feet below and well back from the road. Numerous designated and undesignated access points exist between Essex and West Glacier, allowing for easy access and countless potential campsites.

This section is also a very scenic part of the Middle Fork, with the towering mountains of Glacier National Park and the Great Bear Wilderness often visible. The middle portion of the section, between Essex and Moccasin Creek, only has moderate pressure from floaters and fishermen. 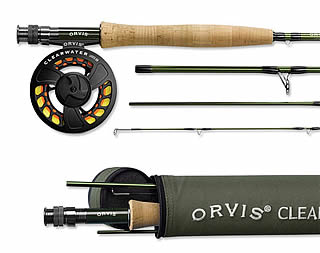 The Middle Fork of the Flathead River, like its cousins the North Fork and the South Fork, is fed predominantly by snowmelt. This keeps the level of nutrients in the river low. As a result, the Middle Fork is not noted as a top trout stream.

That said, the wilderness portion of the Middle Fork contains a healthy amount of decent sized cutthroats up to 16 inches. And they aren’t picky about what they eat. The fishing pressure in the wilderness section is very low compared to other Montana waters, and cutthroats themselves are not known as the most finicky fish around.

The result is that a fishing excursion into the wilderness portion of the Middle Fork, whether it be by foot, plane, or horse, provides outstanding scenery, chance encounters with the local fauna (this area is prime grizzly bear habitat), and solid action for average sized fish.

For the fly fisherman, pretty much any dry and bushy fly, floated around the usual likely spots will produce consistent results. Another technique to try is to use a weighted sink tip line, dragging wet flies or streamers through the deeper pockets and pools that are found periodically along the river. 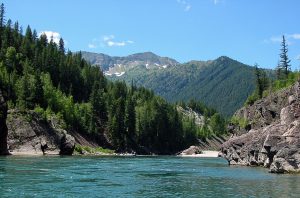 Middle Fork Flathead River has many deep pools, which is where the larger fish are generally found.

Like the North Fork Flathead River, the Middle Fork is prime water for the bull trout. These fish, which are illegal to intentionally fish for or take, are not picky about what they eat. While fishing for cutthroat trout in pools, especially if using streamers, an angler has the opportunity to hook into one of these monster fish, which frequently reach twenty pounds.

Below Essex, the fishing on the Middle Fork dries up considerably. While there are numerous cutthroats, most tend to be in the 8-10 inch range. Action will be fast and furious for these fish, but the results may prove disappointing for the angler pursuing larger fish.

Larger cutthroats can be found in this section, but it often requires a hefty hike along the river or a float trip using a inflatable raft or inflatable kayak to find the spots that hold the larger fish. Fishing pressure is generally light along this portion of the river, and access for the wade fisherman is excellent. Generally, the bigger fish are found in the best structure, particularly in the many deep pools that are found behind the massive rocks that lie in the river, and as far away as possible from the easiest and most heavily used access sites.

The Middle Fork Flathead River is one of Montana’s premier whitewater rivers. It is also one of the wildest, beginning in the Great Bear Wilderness just south of Glacier National Park.

For the 27 miles from Schaeffer Creek down to Essex and Highway 2, where the Middle Fork Flathead River turns into a “recreational” river, the Middle Fork provides continual whitewater, mainly Class II rapids, with numerous Class III & IV rapids as well.

A float through the wilderness portion requires constant vigilance. Several portages may be required around some of the strong rapids, depending on river flows and what type of boat you are using. As the Middle Fork Flathead River flows through numerous canyons, many of the portages are difficult.

Group float on the Middle Fork Flathead River in Montana.

Beginning in Essex, the river turns into a recreational class river and follows Highway 2, dwarfed by tall mountains on either side. The river from this point also forms the southern boundary of Glacier National Park. Numerous access points exist along Highway 2, allowing for a wide variety of day floats.

From Essex down to Moccasin Creek (a distance of 30 miles), only several small Class II-III rapids are found, depending on river levels. However, this section is not recommended for canoes. On almost every curve between Essex and Moccasin Creek (and the river is basically one ending set of curves) large waves and small rapids exist which can easily swamp an inexperienced canoeist. Additionally, around Moccasin Creek, lots of timber lies along the banks of the Middle Fork Flathead River.

It should be noted that Moccasin Creek is a put in spot only, don’t plan on taking your boat out at this access site unless you want to paddle up a side channel of the Middle Fork Flathead River for more than a quarter mile in shallow water with fairly swift currents (experience learned the hard way).

Note, a guide contacted me and said there was a “hidden channel” that allows you to float down the river to the take-out point at Moccasin Creek. I’ll have to take his word, because I heard about it too and looked for it on my floats and have yet to find it. Still, it’s probably there someplace.

Below Moccasin Creek to West Glacier, a popular whitewater section begins, with a number of Class II, III and one Class IV rapid (Jaws). This section of the Middle Fork Flathead River is the most heavily used due to its excellent whitewater. If you are searching for solitude, it is recommended to go somewhere else. Hard shell kayaks, inflatable whitewater rafts and inflatable whitewater kayaks are the most popular boats used on this section.

For the wilderness portion, a heavy-duty inflatable kayak or raft is  needed, as they are by far the easiest to pack into the Great Bear Wilderness. Below Essex, any size raft, kayak or canoe (experienced canoeists only) will work just fine until the whitewater section below Moccasin Creek, where an inflatable raft, hard shell kayak or inflatable kayak capable of Class IV whitewater is required.

Listed below are selected river miles for the Middle Fork Flathead River in Montana. You can get more detailed information about some of these fishing access spots at the Montana FWP Website.