As you get older, it’s inevitable to fall behind the latest trends and fads. And for the most part, that’s good. After all, fads come and go. Pursuing the latest fads is an often expensive game of chasing one’s own tail.

Yet there are times when you fall behind that you’re left wondering just where the heck you’ve been. Like, what rock have you just crawled out from beneath?

I had this particular feeling the first time I used an Inflatable Stand-Up Paddleboard (known as Inflatable SUP’s), which was made by Sea Eagle.

Like most people who spend time around the water, I’ve seen Inflatable SUP’s before. Typically you’ll see people using them in ocean bays, near the beach and along the shores of popular lakes.

I was always a bit dubious about these “boats.” On the one hand, they did look like they’d be fun to use, especially in very shallow, sheltered ocean bays. On the other other hand, I could scarcely fathom a use for them. After all, I own a wonderful Sea Eagle Explorer kayak, which is far more versatile for my own needs. My kayak can go places no Inflatable SUP ever could.

And truthfully, for my own personal needs, I still can’t find a good use for it no matter how hard I might try. But that’s just me, and my own peculiar needs.

One of my jobs as the owner/webmaster/writer/photographer/everything else of Big Sky Fishing is to always keep an open mind to what visitors to the site might find interesting. And after my first, and only, time using an Inflatable SUP, I definitely felt people who visited this website would want to learn more about them.

After all, Inflatable SUP’s float. Therefore, they are a boat. And since I have this huge, beautiful section on Big Sky Fishing all about inflatable boats, I felt it was long overdue to write something intelligent about Inflatable SUP’s.

I’m no expert on inflatable stand-up boards, which might disqualify this article as “being intelligent.” After all, I only have an hour of experience with one. So don’t look at this article as an “expert” article. Let alone an “expert review” article.

Instead, view this article as an “Introduction to SUP’s” article. A place for people who have no knowledge about these boats to come and learn the very basics of what an Inflatable SUP is, who might want one, and why. And I’ll point you in one direction to where you might want to buy one, should you decide that an Inflatable SUP meets your boating, um….floating, needs.

After that, you’re on your own.

What is An Inflatable SUP?

At first glance, it’s hard not to view an inflatable SUP as an odd shaped surfboard. At least that was my impression when I first saw on up close.

The SUP I used, a Sea Eagle Needlenose SUP, is rock-solid. By rock-solid, I mean inflated to a very high pressure—over 10 psi. Basically, it’s nearly as hard as a surfboard. The ability to inflate the board to such a high pressure is due to the unique 100% drop stitch construction.

The combination of high air pressure and the particular design of this SUP led to an interesting surprise. Prior to using a SUP, always thought inflatable SUP’s were a terrible, even stupid, way to “move” across the water.

I was wrong. The stiffness of the SUP, combined with the unique construction of the Sea Eagle SUP I was using, made paddling across the lake I was on far easier than if I used my own kayak. The SUP tracked almost perfectly straight, with virtually no “yawing” back and forth. Thus, I didn’t have to switch sides to paddle unless the wind turned me around.

Moreover, the light weight of the SUP, the “needle nose” front end and the bottom design of the SUP, combine to make it remarkably easy to paddle. Very little effort is required to get the SUP moving, and it’s quite easy to reach speeds I could only dream of going in my expedition level inflatable kayak on flat water.

Indeed, other than the RazorLite or FastTrack kayaks from, I suspect these SUP’s are the easiest “boats” for paddling across lakes that Sea Eagle makes for solo paddlers.

Well, enough of me for now. Watch this video, made by Sea Eagle, to understand how these unique boats are constructed and how they can be used.

Kind of an interesting video, wasn’t it? After watching the video, I understood why I had a good first “SUP experience” while the friend I was with, who rented a different brand SUP, did not. The board my friend rented had severe yaw, tracking left then right. Meanwhile, the Sea Eagle SUP I rented tracked straight and was easy and fun to paddle.

Anyways, back to the primary question. Who might want an inflatable SUP? 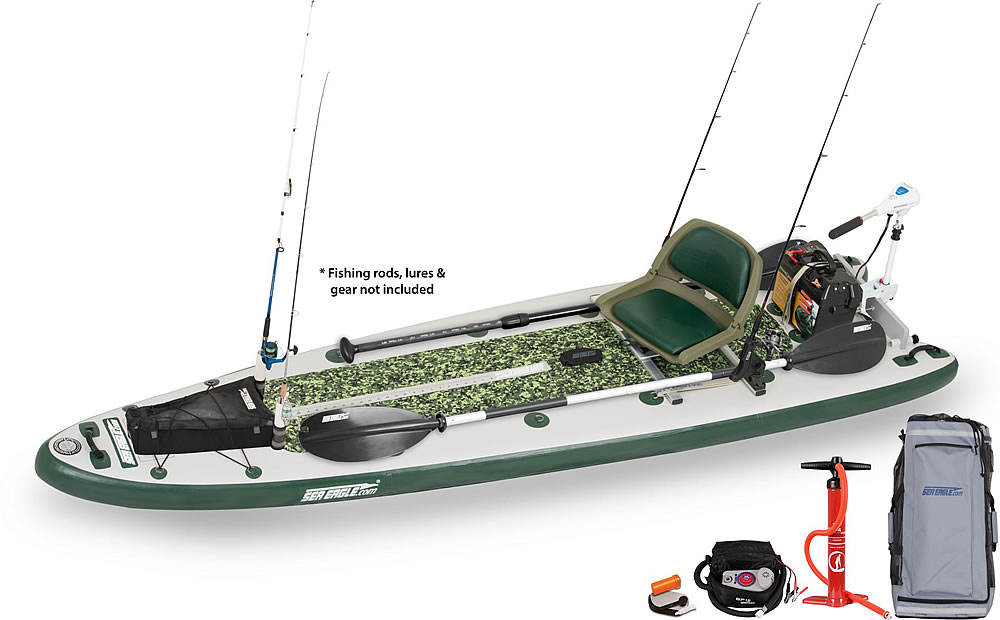 Not me. Truthfully. I’ve thought long and hard about these SUP’s, and I keep coming back to the same fundamental answer. SUP’s are fun, but for my own needs that require river running and overnight floats, an inflatable SUP just won’t cut it. If I bought one, it would likely gather dust in my garage. It would always play second fiddle to my kayak, and probably even third fiddle behind my raft.

But I’m different. Maybe even weird. And my own needs are certainly not the same as yours.

So I’m left with a thought experiment. Who might like these inflatable SUP’s from Sea Eagle, or the many other manufacturers that make these increasingly popular boats.

Well, in this video a couple explain why they bought three Sea Eagle SUP’s.

So the SUP’s are great for workout’s (which I can attest to after my lone hour using one), having the kids tag along on the boards while having them use it as a diving board, and in general playing in the water.

And really, that was my impression of the SUP when I used it. These boards don’t have specialized uses per se. Instead, they’re a boat for people to use to have fun with in the water.

Of course, like other quality boats, you can use these boats for adventures. Due to the tough, almost bullet proof construction of these SUP’s, you don’t have to worry about getting a hole in them and then watching as they disappear into the depths of the ocean or lake.

So, if you feel adventurous, you can use a SUP – with an optional rowing frame – to travel from Singapore to New Zealand if you like.

If you can use a SUP to travel from Singapore to New Zealand (albeit walking half the way across Australia), I was left thinking why not travel down the Intercoastal Waterway. Why spend 200K on a fancy Trawler to cruise the long and narrow Atlantic ditch when you can use an inflatable SUP instead?

Heck, you could even use it to meander around the Florida Keys. Or to explore the bayous of what’s left of the Mississippi River Delta. The optional rowing frame really does open up lots of unique and interesting adventures.

Still, I’ll stick with my kayak.

Yes, it can be done. Just need a board designed to do it, and a lot of experience riding one.

It’s Colorado. So naturally you have a dog on a Sea Eagle Longboard SUP, brought to the lake in the back of a Subaru Outback.

BTW…I’m not knocking Subaru’s. After all, I own an Outback myself.

Where to Buy Inflatable SUP’s

Since I’m biased and not afraid to admit it, I’ll suggest starting your search for Inflatable SUP’s at Sea Eagle.Com. I own three Sea Eagle boats and never had a single issue with any of them. So naturally, I prefer Sea Eagle products all things being equal.

That said, from my one-hour “not-quite-exhaustive search” of the Internet for inflatable SUP’s, I also discovered that they seem to have one of the largest selection of different types of SUP’s available. Moreover, they are superbly designed and super tough. At a minimum, they sure look a lot nicer than most other SUP’s floating around.

Better yet, they aren’t much more expensive than some of the Chinese clones that happen to wash up on American shores from time to time.

Of course, other places sell inflatable SUP’s too. Here’s links to the various places I found in my not-so-exhaustive search for Inflatable SUP’s.

And I’m sure there are many more.

If you’re unsure if a SUP is for you, or if you do know a SUP is for you but you’re not sure if a particular SUP is the perfect SUP for you, one good way is to read the owners manual. This helps prevent unpleasant surprises after you buy the SUP.