So that begs the question, what is an inflatable fishing raft? And why would an angler want one? 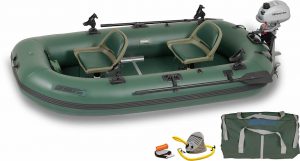 The Sea Eagle Stealth Stalker 10 is a a featured packed, high-pressure inflatable raft that specializes in fishing. More info at Sea Eagle.Com

An inflatable fishing raft is a raft designed specifically for fishing. Can these rafts be used for recreational floating? Sure.

However, these rafts make no effort to conceal their true purpose—which is fishing. Unlike standard inflatable rafts designed for recreational floating, inflatable fishing rafts come with a myriad of equipment and optional features that anglers often desire. These features range from rod holders, to motor attachments, to swivel seats and even canopies.

The purpose of this article is to introduce angler’s to dedicated inflatable fishing rafts—or those designed specifically for serious fishing.

Do You Need an Inflatable Fishing Raft?

So who needs an inflatable fishing raft? Anyone who fishes and needs a boat, right?

If only it was that simple.  An inflatable fishing raft—as in, those rafts that specialize in fishing—are meant for anglers who are more than “casual anglers.”

Casual anglers, or those who only occasionally fish or spend more time doing recreational floats instead of chasing bass or trout, can save money by going with a less expensive recreational inflatable raft. These rafts—exemplified by the Sea Eagle 9 Motormount—are durable and very flexible. While they lack many of the features dedicated anglers seek, such as swivel seats, ability to stand while casting and rod holders—they still work quite well for just occasional fishing. And should your fishing needs change, upgrades are available to allow trolling motor attachments and floorboards.

An inflatable fishing raft—as in, those rafts that specialize in fishing—are meant for anglers who are more than “casual anglers.”

Ultimately, anglers need to decide how much they fish and whether a dedicated fishing raft is worth the extra expense.

That said, for anglers who fish frequently and seek to maximize their productivity while on the water, there’s no doubt that an inflatable fishing raft is an ideal boating platform and is worth the money spent.

Finally, occasional anglers might also want to consider going an inflatable kayak, especially if you plan on fishing rivers or water where motors aren’t allowed or practical. In some ways, inflatable kayaks (whether recreational, expedition or dedicated fishing) are more flexible boats for those who don’t seek a true “dedicated fishing boat.”

Once upon a time, anglers had few choices if they wanted an inflatable fishing raft. And as far as frames went, you had no choices at all. It was “raft with frame or bust,” you might say.

And the frameless rafts are much less expensive.

But let’s back up for a minute. What is the difference between an inflatable fishing raft that has a frame—and one that doesn’t? A picture is worth a thousands words, so below are examples of a frameless fishing raft, a traditional whitewater raft with fishing frame, and an inflatable raft with floorboards. 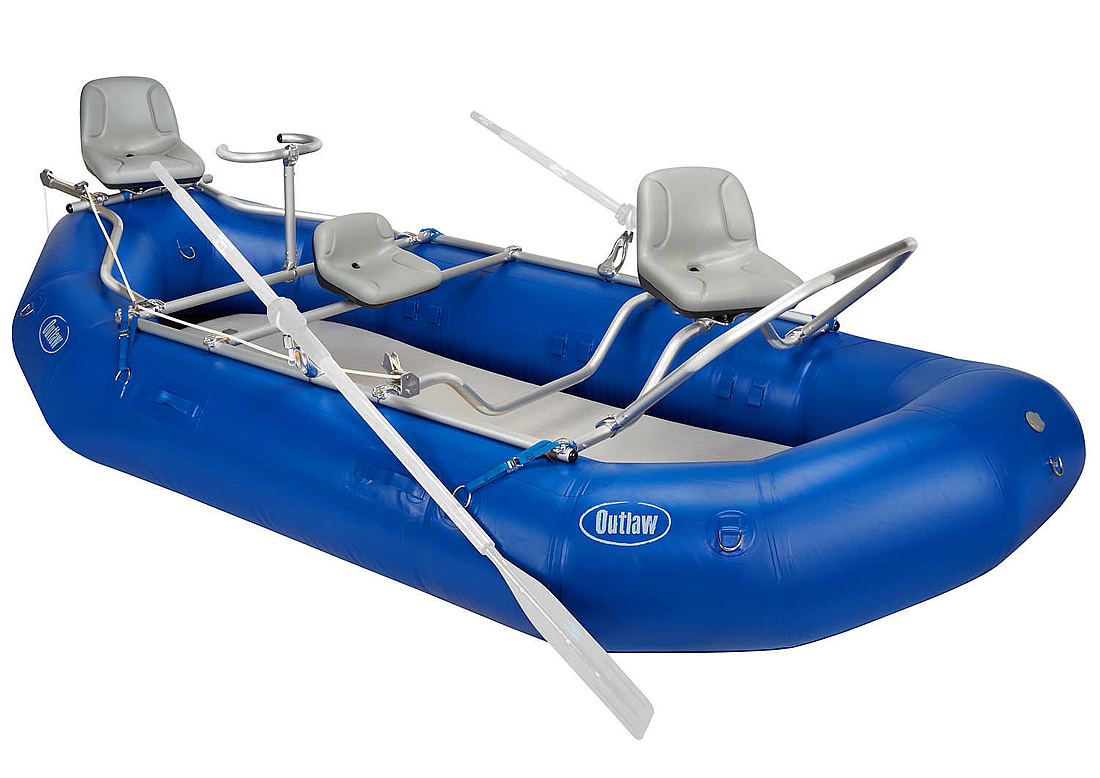 NRS Outlaw Inflatable Raft with Bighorn II Fishing Frame. The frame on this raft makes the raft super rigid and allows for the attachment of rowing frames, multiple seats, countless fishing accessories and tie-downs for gear. More info about these types of rafts at Backcountry.Com 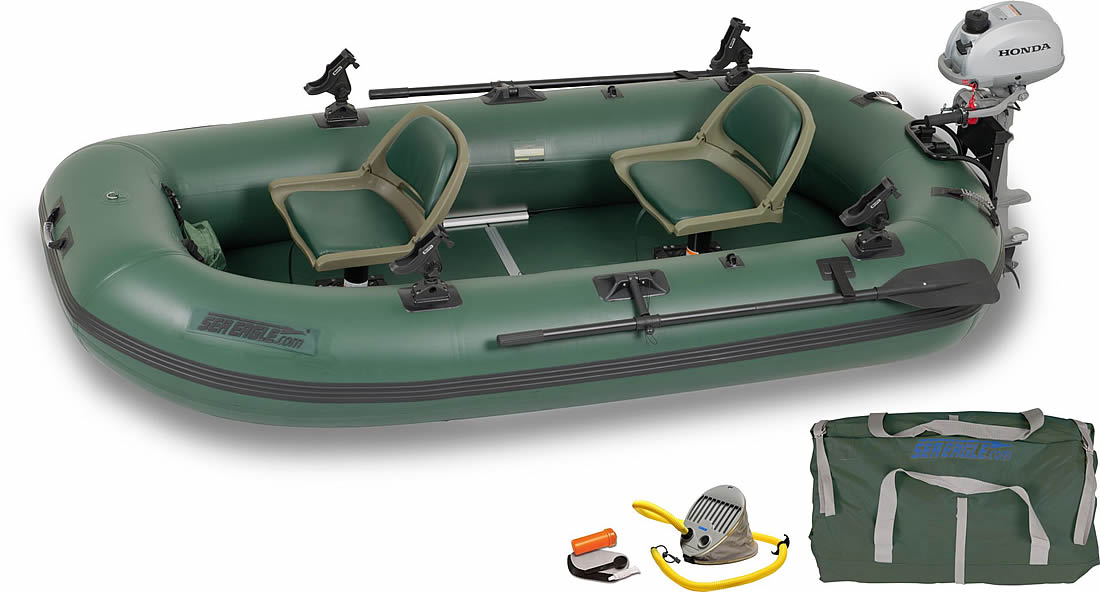 So which raft to get? It all depends on your uses and your pocketbook. There is no “right or wrong” answer here.

Designed for 1-2 anglers and for use on lakes and rivers with rapids up to Class II, the Stealth Stalker is, by far, the most portable inflatable fishing raft available.

Made from tough 1000 denier (the same thickness as used one expedition level inflatable kayaks), these rafts will last a lifetime with proper care.

Benefits of this raft include:

More information about the Stealth Stalker 10 at Sea Eagle.Com

More information about the Stealth Stalker 10 at Sea Eagle.Com

Designed for larger lakes and ocean bays, the Fishing Skiff can use up to a 6hp gas motor to race along at up to 17mph. While the Fishing Skiff 16 may not look like a “true raft” since it’s isn’t rectangular in shape, make no mistake it serves the same functions. And unlike a traditional raft, this boat is meant to fish ocean bays and other sheltered ocean/big lake waters.

Virtually any moderate to large sized whitewater raft can use a raft frame. Some frames are designed for heavy whitewater use. Other frames specialize in fishing. For those who desire a boat that works superbly for running rivers and heavy rapids, and need a boat with a large capacity, these rafts are the boat of choice.

If you elect to buy a whitewater raft, be sure to first narrow down what raft frame can be installed on the raft. Not all frames work with all rafts.

As for where to buy large, guide quaility inflatable rafts and raft frames, by far the best choice is NRS. NRS sells the highest quality rafts available, and their rafts are widely used by fishing guides and recreational float businesses.