It is always interesting how rivers get their names. If a list were ever compiled of misnamed rivers, then surely the Stillwater would be near the top of the list. Despite its name, the Stillwater River has significant whitewater, large drops, rocks and a very swift current. It is anything but “still.” Indeed, a fisherman or floater will have to look hard to find calm stretches of this river.

Once it leaves the wilderness area, the Stillwater River flows for another 45 miles through a mix of canyons, prairie and forest until meeting up with the Yellowstone River near the town of Columbus, Montana, which is about 45 miles from Billings, MT.

The Stillwater River is an absolutely beautiful and wild river. The Absaroka-Beartooth Mountains provide a stunning backdrop to any fishing or float trip. Fishing pressure on the Stillwater River is moderate—most out of state anglers venture to the much more popular and well known nearby rivers such as the Yellowstone Rive. That said, mya locals ply the waters of the Stillwater in search of the plentiful rainbow, brown and cutthroat trout that are found in the river.

From its origin down to the town of Nye, the Stillwater River is very lightly fished. As one might expect, fly fishing the Stillwater River on this section involves lots of pocket water fishing. With the fast current, rocks and whitewater, the rivers excellent trout populations will be held up wherever they can find shelter from the strong current. 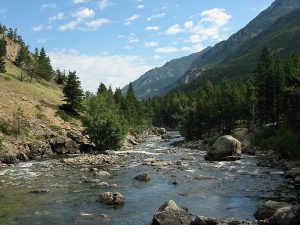 For fly-fishing, virtually any dry fly imitation or attractor works just fine on this stretch of the Stillwater River. The fish are not picky about what they take. The fish tend to be on the small side, between 8-10 inches. The fish in the wilderness portion consist of cutthroat, rainbow and brook trout, with an occasional golden trout as well. Spin fisherman can have success with small spoons.

Below Nye, brown trout start showing up both in decent numbers and size. Rainbow trout and cutthroat trout are also found along this stretch.

When fishing for brown trout, use standard brown trout tactics. Use large streamers, floating them through pools, along submerged obstructions and near undercut banks. Large nymphs, such as a Hare’s Ear, also work well when fished near the bottom. For rainbow and cutthroat trout, standard dry fly and attractor patterns work just as well as they do further upstream. Brown trout exceeding twenty inches can be found and average 12-14 inches. Rainbow trout in this section of the Stillwater River average about 12 inches.

Beginning in July and continuing through mid-September, hoppers also work extremely well for both the rainbow trout and brown trout. Additionally, any angler who plans on fly fishing this river later in the summer should bring plenty of caddis fly imitations, such as the Elk Hair Caddis, as caddis hatches occur below Nye most evenings.

It should be noted that the Stillwater River is exceptionally rocky. A good pair of wading boots is highly recommended. The rocks in the river are slick, loose and very plentiful. Combine this with the fast current and surprise holes, and you have some recipes for interesting fishing stories. Additionally, the fast current of the river can require some accurate casts to hit the holes, runs, riffles and the pocketwater. While the trout in the Stillwater River are not finicky eaters compared to most Montana rivers, sloppy presentation greatly hinders successful fishing. 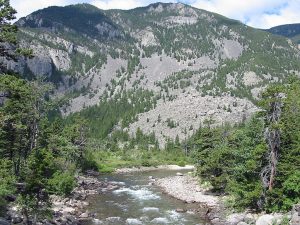 Once the river leaves the wilderness area, the Stillwater River still has extensive rapids all the way down to the town of Nye, eight miles downstream from the wilderness area boundary. Above Nye, the river is frequently quite narrow, shallow later in the summer and very rocky. Anyone who doesn’t know how to maneuver a kayak or inflatable whitewater kayak should shy away from this section.

Below Nye, the Stillwater River mellows out somewhat. While the current is quite quick and many Class II and Class III rapids still exist, the river is floatable by skilled floaters in hard shell and inflatable kayaks, canoes or smaller inflatable rafts in all but the highest water.

Rocks are a constant presence on the Stillwater River. Later in the summer during low water flows, rocks are found sprinkled throughout the river, requiring some skill in avoiding them.

Late summer rafting also presents problems for parties in large rafts between Buffalo Jump and Cliff Swallow Fishing Access sites. The water is quite shallow in many sections and rocks litter the entire width of the river, especially around Castle Rock and Moraine Fishing Access Sites. Large rafts will likely have a difficult time avoiding them, which is why a hard shell kayak, small inflatable raft or inflatable kayak is a good choice for late summer paddles on the Stillwater River.

Beyond that, other than a diversion dam that can be avoided near the Johnson Creek Bridge, the river has no obstacles down to the Yellowstone River.

Listed below are selected river miles for the Stillwater River in Montana. You can get more detailed information about some of these fishing access spots at the Montana FWP Website.