Flathead Lake is the largest body of natural water found west of the Continental Divide. It is a beautiful lake, surrounded by the tall and impressive Mission Mountains on the east and the smaller Salish Mountains to the west. The broad Flathead Valley stretches off on the north and south sides of the lake. The town of Polson sits on the south shore of the lake, while the popular and artsy town of Bigfork lies on the northeast corner.

Flathead Lake is very popular for pleasure boaters. Due to the lakes size and beauty, sailboats are common on the lake, along with pleasure boats of all kinds. The lake itself is ringed by vacation homes of increasing size and elegance, as more and more individuals from outside Montana build exotic homes on the lake.

The lake itself offers excellent fishing, but not necessarily for fly fishing. The fish species in the lake consist primarily of lake trout, pike, yellow perch and whitefish, with some rainbow trout, bass, kokanee salmon and bull trout also found. The lake trout in Flathead Lake can reach monstrous sizes, frequently exceeding twenty-pounds. An average lake trout is considered to be in the three to eight pound range and are caught frequently. 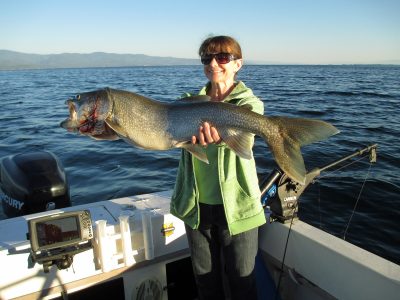 The lake trout on Flathead Lake average around eight pounds, but many go well over 20. This is my friend Mary who caught her first-ever lake trout.

Fishing for lake trout during most of the year requires a boat with trolling gear, since the fish inhabit deep waters. The exception to this occurs in the fall, in September, when the trout come near the shoreline, providing enticing fly fishing opportunities. Stout gear and large streamers, fished just off the shoreline, especially in shallow bays, up to 10 feet of water, can grab some very large trout in unlikely places. While a fisherman can conceivably wade fish during this time, a boat is really still needed to reach these fly fishing spots.

Fishing for whitefish in the lake is also popular. The whitefish can also be very sizable, frequently topping 10 pounds. As there is an abundance of both whitefish and lake trout in Flathead Lake, a fisherman should not feel guilty about keeping some at the end of the day. Just be sure to release any bull trout that are accidentally caught.

Kerr Dam, located in Polson, manages the water levels of Flathead Lake. While the dam did not create Flathead Lake, it does regulate the lakes water level, which receives the bulk of its water from the Flathead River and the Swan River. As a result, during low water years later in the summer, parts of the shoreline of Flathead Lake become exposed, leading to some headaches for boaters at some boat ramps.

Anyone who plans to fish on Flathead Lake needs a powerboat. The sheer size of the lake, combined with the often windy conditions, require a powerboat if the angler wants to cover large amounts of water. That said, the use of hard-shell and inflatable kayaks, inflatable paddleboards and other recreational inflatable boats are popular near the shore. Sea kayakers also often venture across the lake.

Overall, Flathead Lake is one of the premiere and recreational and fishing lakes in Montana. It is popular for both fishing and pleasure boating, and its beautiful setting makes any day spent on the lake a rewarding one.