The Lamar River, due to both its spectacular scenery and quality fishing, receives a fair amount of fishing pressure, especially around the Soda Butte Creek confluence. The river is easily accessible by road since the highway between Tower and the Northeast Entrance closely parallels the Lamar River in the Lamar Valley.

Generally, the Lamar River in Lamar Valley ranges from between 25-200 yards away from the road, allowing for easy access. And hiking to the river is easy. All that is entailed is hiking across the beautiful meadows and grasslands found in the valley.

The best fly fishing on the Lamar River occurs once run-off subsides, usually between late-June to late-July. When not being fed by melting snow, the Lamar River has crystal clear water. Cutthroat and rainbow trout, in decent sizes, are found in the Lamar River. Rainbow trout up to 16 inches are not uncommon, with the average size being around 12 inches. 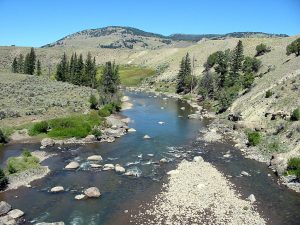 However, if you do forget this, you will be quickly reminded of it while walking from the road down to the river. Hordes of grasshoppers and crickets await the person who leaves the trail and ventures to the river. Moreover, your vehicle is likely to be covered with them after a drive through the Lamar Valley, so make sure your washer fluid is filled in the car, too.

Although the Lamar River is a popular river for fly fishing, it is not difficult to find solitude on the river. Simply locate the area of the river that seems farthest from the road, pull off on the nearest pullout, and begin the easy couple hundred-yard walk across the beautiful meadow down to the river. Another option to find solitude is to go upstream on the Lamar River, above Soda Butte Creek. Virtually all anglers focus their attention right around the confluence with Soda Butte Creek. A short and easy walk upstream will bring you to waters much less traveled.