Martinsdale Reservoir is located at the edge of the mountains in Central Montana, near the headwaters of the Musselshell River. Although the reservoir itself lies in a grassy, open area, the Crazy Mountains and Belt Mountains tower above the landscape, making for a pretty setting.

Similar to other nearby reservoirs, such as Deadman’s Reservoir, Martinsdale is significantly drawn down during the summer for irrigation use. By August, it is not uncommon for the boat ramp to be out of the water completely.

Fishing pressure on the reservoir is low. Its isolated location far from any major population or tourist area keeps it virtually unknown by all but the local anglers.

Since few people live in this section of Montana, the use by locals is moderate. Usually, pressure is low, but during summer weekends the fishing access site does become busy—particularly when the water level is high enough to launch boats.

Martinsdale Reservoir has a very nice recreation site built around it. The fishing access site encircles about half the lake, allowing for excellent camping opportunities. Normally, finding a camping spot isn’t difficult. However, the reservoir has become increasingly popular for camping. As such, busy summer weekends often find the reservoir ringed with campers and RV’s. 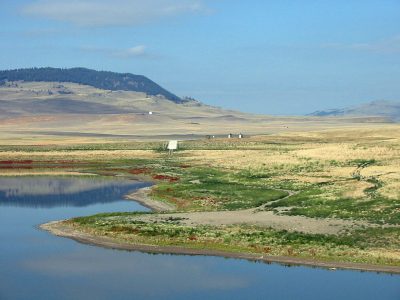 Martinsdale Reservoir, at full pool, is over 100 feet deep and covers 950 acres. Because of the reservoirs relatively large size, fly fishing from a boat is the best way to cover the water. Just be aware that high winds often make paddling a challenge. Motorboats are the best boats for the reservoir, but inflatable boats that paddle well—such as inflatable kayaks and inflatable canoes—do work well when conditions aren’t too windy.

Despite the heavy irrigation use, the reservoir is stocked yearly with rainbow trout. In the reservoir’s warm and somewhat fertile water, the trout can get quite large. Catching rainbow trout exceeding three pounds is not uncommon, with average sizes running between 12-14 inches. Brown trout are also found in decent numbers and size. Streamers, particularly on sinking or sink tip lines, are the flies of choice.

The best time to fish Martinsdale Reservoir is in May or June, as the water starts to warm but before irrigation starts to lower the lake level. Fall also opens up fishing opportunities as the cooler temperatures spur feeding activity. Fall is also the best time to catch the large brown trout found in the lake.

Services near Martinsdale Reservoir are almost non-existent. The very small town of Martinsdale has a few services. But beyond gas and a few other items, anyone visiting this reservoir will need to drive to While Sulphur Springs or Harlowtown for most services or supplies. Both towns are a considerable distance from the reservoir. As such, campers are advised to bring all they need.

This site uses cookies: Find out more.
Go to Top